Here Are Some Fun Facts About Kea.

The kea is a parrot and like all parrots it has 4 toes on each foot – two that point forward and two that point backward (zygodactyl). This allows it to easily manipulate objects (more like having hands than feet), and move around in the trees and on the ground.

The kea’s plumage (feathers) is generally an olive – emerald green edged with black and bright orange and barred yellow and black feathers are normally hidden on the underside of its wings. You wouldn’t know it to look at a a kea but the orange feathers can also be seen in the UV spectrum – light waves that we humans cant see in but many birds and insects can. Other colours on the kea include a beautiful royal blue on the top surface of each wings long flight feathers and red/orange on the rump (tail) feathers.

The kea’s beak is long and gracefully curved. The males beak may be around 4.5 – 5 cms long and the females is somewhat smaller (4 -4.5cm). The kea’s beak is very different shape to its cousin the kaka’s beak which is much thicker and shorter. This is because of the different foods that each of these parrots eat – kea dig grubs from rotten logs and roots from the ground (digging and manipulating tool) while the kaka cracks open hard seeds, nuts and digs at logs (a nut cracker!).

Although kea are not generally known to “talk” like some other parrots (particularly the African Grey Parrot), they have a wide range of sounds that they make, depending on what message they want to get across to each other. Here is a sample of kea sounds for you to listen to. Kea are the heavy weights of our flighted terrestrial (those that live on land) birds. Males range from 750g- 1kg and females are slightly lighter at 700g – 850grams. That’s about the weight of a domestic bantam (very small breed) chicken. The shape and weight of kea ensures they dont lose heat too quickly when up in the freezing mountains – so they are very well adapted to the cold alpine environment.

Q. Who gets colder quicker? Your short skinny friend or your short stocky friend? Why? How Clever Are Kea?

Kea are thought to be VERY clever! Some scientists even think that they might be as smart as a 4 year old child! Thats pretty smart.

There are researchers around the world that are doing some great fun experiments that kea really enjoy doing – let’s take a look at them and then YOU can decide how clever kea really are…. 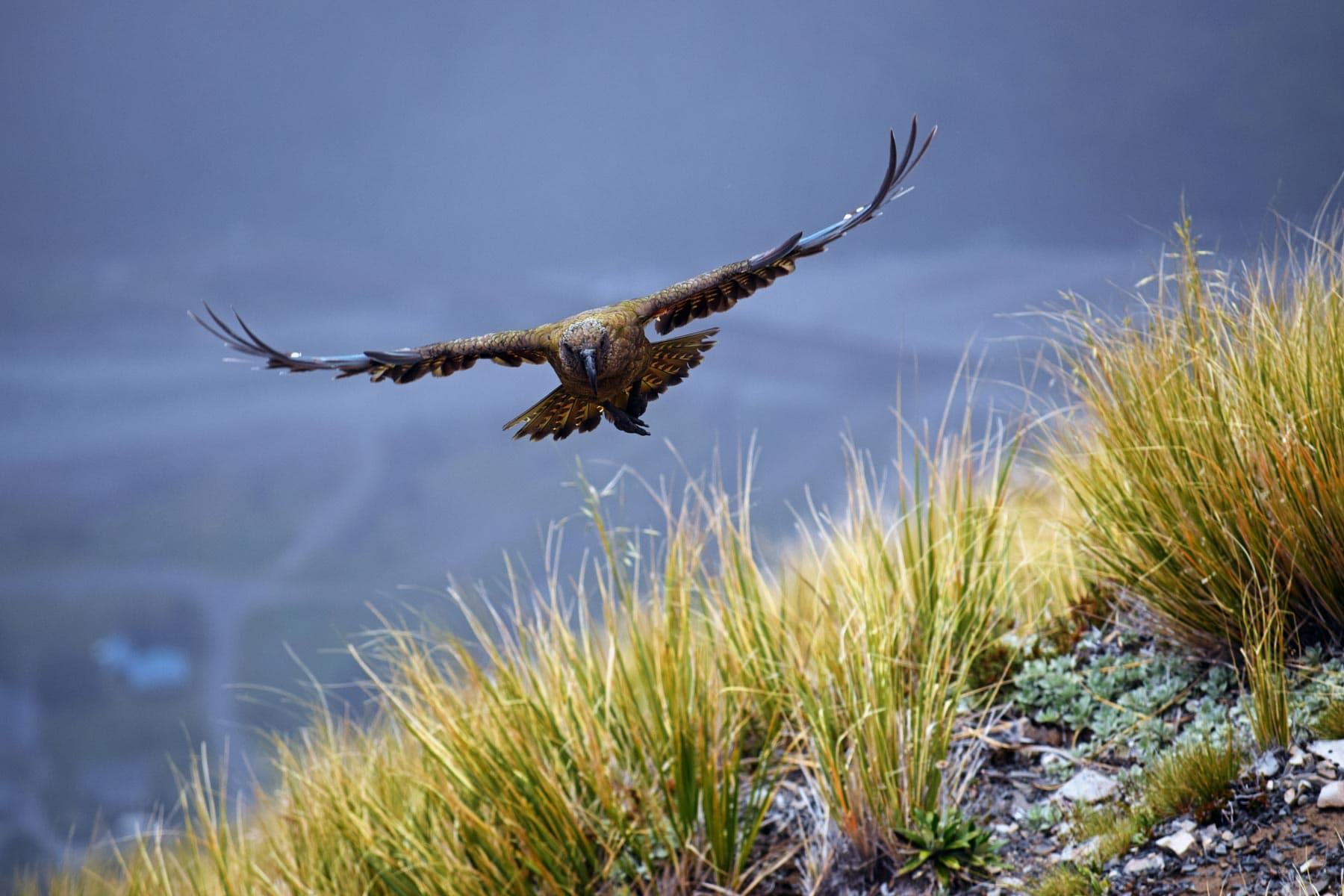 Kea are a solid parrot about 46cm long (about the size of a cat sitting up). They have a wingspan of about 1 metre when they are in flight.

Q. How far can you stretch your arms out? (Are they a metre wide from fingertip to fingertip or are they wider?).

Where Do Kea Live?

Wild kea exist only in the South Island of New Zealand in and around the alpine areas. They nest in the beech forests at sea level on the West Coast of the South Island, in the mountain forests along the Southern Alps (as far north as Kahurangi National Park and as far south as Fiordland) and are also in the mountains as far east as Kaikoura.

Kea which have formed pair bonds ( breeding male and female) hold a territory (an area for themselves that no other kea pairs can live in – a bit like peoples homes and property the house sits on) of about 4kms2. If you stand at the bottom of a mountain range, you will see ‘spurs’ coming down the mountain with valleys on either side. A kea pairs ‘home’ territory will be the entire spur. They will share it with their chicks each year as well as sub-adult and adult males who may come through to visit for a while.

Q. In many areas much of the beech forests have been burned for human settlement. How do you think this might have affected the kea?

How Can You Tell Kea Apart?

It is very difficult to tell males and females apart by sight alone, but generally males are larger than females with males also having a longer curved beak. Researchers also take the weights of kea as well as measure the length of the beak and the length of the head (from the nostrils to the back of the skull). To be absolutely certain, a DNA sample can be taken (a feather or two or a small blood sample).

The difference between young (juvenile) and adult kea is much more obvious. Very young kea that have just left the nest have a pale feathers on the top of their head and very bright yellow colouring around the eyes, nostrils (cere) and top of the beak (the pale head plumage can be clearly seen by other kea in the UV spectrum). As the kea get older, the yellow slowly disappears and the head feathers darken. An adult kea (4 years+) has dark colouration around the eyes, nostrils and beak.

Q. Look at all the photos of kea on this page and on other pages in this website. Can you tell how old each of the kea are?

Kea can breed each year and are generally thought to mate for life. The female will usually lay a single clutch of eggs per year of 2-5 eggs in a burrow deep in the ground under a beech trees roots or large rock outcrop. If her eggs are eaten by possums or stoats (introduced predators), the female may lay another clutch of eggs if not too late in the season. The male and female line the nest with feathers, soft wood chips and dry moss and lichen to protect the eggs and keep them warm.

The female sits on (incubates) the eggs for 1 month during the winter/spring and is fed by the male during this period. When the eggs hatch the male will then have to find more food for both the female and the chicks (as well as himself!). This can be very hard work particularly if it is snowing hard outside. Once the chicks are able to keep warm by themselves, the mother will also join the search for food to feed them.

Eggs are normally laid from July – October and the eggs hatch out after 4 weeks. The chicks will then leave the nest about 12 weeks later.

Q. What happens if a female lays her eggs very late in the season (January or February)? Will this affect the chicks ability to survive? If so, why?
© Kea Conservation Trust 2022. Made with ♥️ by Avoca in Nelson, New Zealand   |   Privacy Policy